Last year, Emakina group again recorded double-digit revenue growth and maintained its net result. Thanks to this, the group has been able to strengthen its equity base. 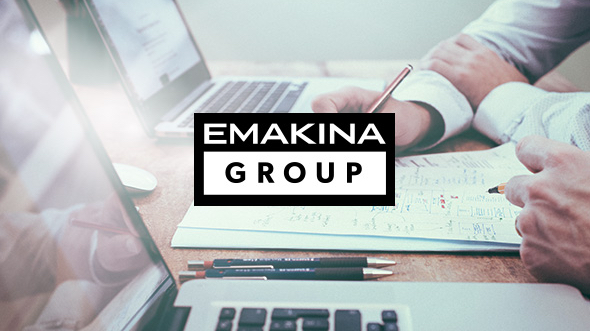 The CEO’s continue: ‘This performance is the result of a commercial and implementation strategy that is increasingly well integrated by all the teams in the group, while the Group continues to invest in the right technological choices and in recruiting the best talent. We would like to thank all our clients once again for their confidence in us, as well as our 765 strong staff and our sales partners for their excellent contribution.”

Frédéric Desonnay, CFO of Emakina Group explains: “The international expansion of the group is continuing, with 59% of revenues in 2016 coming from outside Belgium. At the same time, revenues recorded with Belgian clients rose by 6% in 2016. Meanwhile the operating margin fell back somewhat in 2016 (-11%) having risen very sharply in 2015 (+50%). This is due mainly to the substantial investments made necessary by the sustained growth in our activities and the essential need to integrate the group’s entities.”

In January 2016, Emakina acquired a 100% stake in the Swedish digital agency Dempsey, based in Stockholm, with a staff of 15. Through this transaction, following on from the commercial partnership agreement signed in 2013, Emakina reinforces its presence in the Scandinavian countries.

In September 2016, Emakina acquired a 100% stake in k.section, a CRM expert agency, based in Vienna. k.section is a certified partner of the world’s leading CRM solutions, including Siebel/Oracle, Microsoft Dynamics, and Salesforce. The k.section team comprises around twelve experts.

In January 2017, Emakina acquired all the capital in the Swedish company Doe Blomberg Gottberg (DBG), three times winner of the Swedish ‘Communication Agency of the Year’ award. By acquiring this second agency based in Stockholm, Emakina has reinforced its presence in Scandinavia, where it now has over 30 staff, as well as its position as European leader as an independent full-service agency.

In geographical terms, the share of the revenues recorded ‘outside Belgium’ accounted for 59% of the consolidated revenue in 2016, compared with 57% in 2015.

The group’s significant expansion over the past few months calls for a considerable effort as regards integration and synergies among the various entities in the group.

In practical terms, this is reflected in the deployment of joint management platforms and in better sharing of respective know-how, available resources and technologies. These efforts inevitably weigh on the group’s operational profitability.

Talent is both the main asset and the challenge facing Emakina Group, which does everything possible to attract and develop exceptional people. At Emakina Group, talent is given the opportunity to develop: through contact with colleagues and demanding clients; by receiving training; by participating in research and development programmes.

In 2016, Emakina won 70 awards for various projects involving web-building, motion, design and creativity, emphasising the quality of the services we provide.

Congratulations to all on this fine performance!